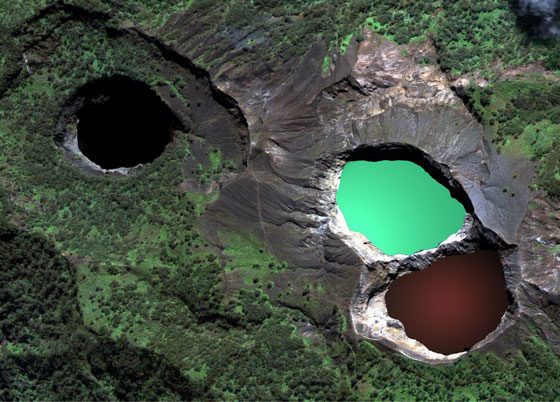 In 2004 the Flores Island in Indonesia – flashed unexpectedly onto the world’s headlines after 18,000 year-old humanoid fossils were discovered in a cave there.

Quickly dubbed “hobbits”, these one meter tall human relatives caused a sensation in anthropology circles and captured the world’s imagination. Until this discovery most scientists believed the last human cousin species to die out were the Neanderthals, some 30,000 years ago. The remains of these eight “hobbits” forced a rethink of human evolution and bought this Indonesian backwater to the attention of the world.

Already the coverage of Flores’ hobbits has boosted interest in the island as a travel destination, after years of being one of the least-visited parts of Indonesia.

There are three spectacular water-filled craters atop Kelimutu Volcano on Indonesia’s Flores island. The wildly different water colours are caused by minerals disolved in the water.

Compared to Indonesia’s flagship tourism island of Bali only 500km to the west, Flores Island – Indonesia could hardly be more different.

It has no bustling tourist centre with inexpensive bars and western food. It has no international airport. And it has no world-class hotels on exclusive beachfronts. Don’t be mistaken; Flores is not your island if you’re looking for a relaxing holiday with all the conveniences of modern tourism.

Flores is for those with a taste for adventure, the ability to endure long and painful methods of travel, and a tolerance for barely adequate food and accommodation. At times you wonder what the hell you’ve gotten yourself into, but Flores’ unique highlights make it all worthwhile.

It is a rugged, actively volcanic land covered in jungle where a unique blend of Indonesian, Melanesian and European cultures have fermented during isolation.

The most spectacular tourist attraction on Flores are the three coloured crater lakes atop the volcano of Kelimutu. Visitors to Kelimutu usually stay in the mountain village of Moni, which sits snugly at the foot of the volcano. Moni is a cute hamlet surrounded by terraced rice fields, where low budget accommodation is in the form of charmingly shonky bamboo bungalows suspended above the ground.

The rustic feel of Moni is only increased by regular nightly power failures which plunge your table into darkness at one of only two inexpensive local eateries. Thankfully your friendly florinese hosts anticipate this and are quick to light candles, making your quiet meal at this mountain village even more romantic.

Moni’s unreliable night power supply has one other benefit – it forces you to retire early, which is a good thing since tomorrow you’ll be woken at 4am to scale Kelimutu.

Kelimutu volcano is at the heart of many local beliefs. The inhabitants of Flores believe the souls of thieves and murderers inhabit this black lake on the volcano’s slopes.

In the bone-chilling darkness of early morning it is difficult to rouse much enthusiasm, even with the promise of viewing one of Indonesia’s best natural attractions. However, the steeply winding road 45 minute road up Kelimutu soon jerks awake even the most exhausted of travellers.

At the road’s end you climb a trail so well-beaten that it can easily be followed without a guide, even in the pre-dawn darkness. If you’ve set-out early enough you should arrive at the 1690m summit just as the sky has begun to lighten. As every minute passes, the increasing light unfolds a geological wonder all around.

In front of you are two massive lakes sunken in deep craters. One is chocolate brown in colour, the other a creamy aqua green. Directly behind you, the third crater lake is jet black and almost perfectly round. As the sun climbs into the sky its rays reflect off the lakes, revealing their vivid colours even more clearly.

A Ngada tribesman may sit on the steps of his home in the megalithic-era village of Bena. Local tribal people believe the souls of the dead come to these lakes in the form of mists, which often shroud the peak. According to legend, the souls of young people rest in the brown lake, the souls of the old in the green lake, and the souls of thieves and murderers inhabit the black lake.

The colours of Kelimutu’s lakes have changed dozens of times in the last 50 years – ranging from bright blue and red to black and white. Scientists attribute these changing colours to the varying mineral and oxygen content of the lakes.

Portuguese and Dutch traders were the first Europeans to reach Flores in the 16th century. They introduced Catholicism and built settlements to help harvest and transport such precious commodities as nutmeg, cloves, cinnamon and sandalwood.

While the name could easily refer to the abundant and colourful plant life on the island, it actually relates to the impressive coral reefs that once lined the northern edge of Flores Island Indonesia.

The village of Bena

An overgrown Catholic cemetery sits at the foot of Volcano Inierie. This place can be found along the long, bumpy trail between Bajawa to the village of Bena.

The central highlands around the town of Bajawa boast some of Flores’ best cultural and volcanic attractions. The village of Bena is a pristine example of a traditional Florinese way of life. It is home to the Ngada people – a megalithic tribe who still practice an ancient form of ancestor worship.

Bena is only 20km from Bajawa, but it takes an hour and a half to reach on shockingly poor roads – even by Flores’ low standards. As your four wheel drive bumps and swerves through jungle and massive bamboo thickets you will catch glimpses of another of Flores’ volcanic wonders. The perfect conical shape of Inierie, an active volcano, towers over the surrounding countryside. At the southern foot of this Inierie you find the village of Bena.

The first things that strike most visitors to Bena are the strangely-shaped huts, which are unique to the Ngada people. Circular umbrella-like Ngadhu huts are masculine symbols and the square-shaped Bhaga huts represent the feminine.

However, the most uncanny constructions in Bena are gigantic stone splinters pointing towards the sky. These natural altars are arranged in groups near domestic huts for spiritual purposes. You can see food and other offerings placed on these megalithic stones to appease the long-dead ancestors of the tribe.

The central highlands around the town of Bajawa boast some of Flores’ best cultural and volcanic attractions. Vibrant green terraces of rice plantations are a common sight throughout the island of Flores. Rice is a staple food crop in the region.

When exploring the Bena you will soon encounter women with red stained lips and teeth from constant chewing of Betel nut – a natural stimulant. They flash their somewhat disturbing smile at you from shaded doorways as they busily weave colourful Ikat cloth. This natural textile is made from plant dyes and local cotton, hand spun on basic wooden spinning wheels. For a few dollars you can buy beautiful handmade Ikat shawls, sarongs and blankets that will always remind you of this timeless megalithic village in the threatening shadow of Inierie volcano.

After a long day bouncing along roads seemingly designed to shake your bones loose from their joints you’ll probably be looking for some form of alcoholic refreshment. Luckily – or unluckily, as the case may be – Flores produces a specialty alcoholic drink called Arak.

This powerful moonshine-style spirit is made all over Flores from palm sap – a resource which grows in abundance. In many parts of the island you’ll see dozens of dirty milk bottles filled with the murky stuff for sale beside the highway. If you look a little closer you’ll find a thriving cottage industry where locals produce Arak in wood and bamboo distillers.

Arak preparation is hardly the careful, slow process you might expect. In fact most Arak takes only five days to be turned from the raw sap of the palm tree into an equally raw intoxicant capable of striping paint – as well as probably the lining of your stomach.

A local man sorts various grades of rock on ‘Blue Stone Beach’, which are then used in paving projects throughout Indonesia. In the background is the active Volcano Gunung Ipi near the town of Ende.

The western edge of Flores is the normal entry point for those arriving by torturously slow ferry from Bali, Lombok or Sumbawa. Here, the fishing village of Labuanbajo is a good place to relax for a day or two. You can arrange a boat tour of nearby Komodo island – the extremely popular home of the enormous dinosaur-like Komodo Dragon lizards.

However, it is worth noting that Komodo Dragons also exist in small number on Flores’ western and northern fringes. Labuanbajo’s main attractions are a string of offshore islands boasting pristine white sand beaches and safe swimming in azure waters. There is no shortage of local fishermen who will take you to one of the islands in a basic longboat for a few dollars.

Like the rest of Flores, tourist development of these islands is almost nonexistent. Some have basic bungalows, but most are uninhabited and have no facilities – the perfect place to drift into a Robinson Crusoe daydream.

But a word of warning: sometimes you’ll think you’re on a deserted island only to discover otherwise. One such place is known as Angel island. For three hours we were deliciously alone on our own paradise playground. That was until a rickety jeep arrived with half a dozen dishevelled local militia. Two serious-looking uniformed men carrying machine guns eyed us suspiciously from us distance, but never approached. Thankfully they were more concerned with supervising the unloading of supplies from a small boat than intimidating a couple of sunbathing tourists. But, this sort of scenario is a reminder of Indonesia’s volatile nature, even on Flores, at the ragged eastern edge of Indonesian territory.

The dream, mirror of our angry brain
How to make a colored epoxy coating concrete