The Coronavirus Exposes Weaknesses in the American System 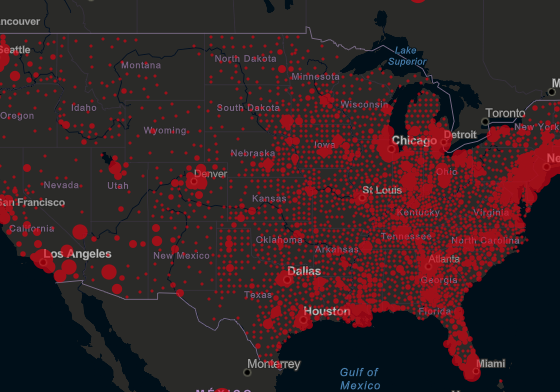 Faced with the coronavirus, America seems to have clay feet.

A pandemic (from the Greek pan = all and demos = people) is an epidemic that extends to almost an entire population of a continent or several continents, even in some cases of the planet.

Several pandemics have affected humanity: the black plague (or bubonic plague) which caused several million deaths in Europe, between 1346 and 1350, the Spanish flu from 1918 to 1920 which made 15 million deaths by spreading from China to Japan, Russia, Europe and North America.

After infecting 40 million people, AIDS is now considered a pandemic; it seems to have become the deadliest in human history.

Social and racial inequalities, inadequate health care system, political disunity between states … The pandemic has thrown a crude light on the multiple vulnerabilities from which the United States suffers.

On May 4, in the virtual space that coronavirus diplomacy now imposes on world leaders, Ursula von der Leyen, the President of the European Commission, announced the launch of a global fund for research into a vaccine against the Covid-19.

Among the many heads of state and government gathered in mosaic on the screen in front of her, the Japanese Prime Minister, Shinzo Abe, rubs shoulders with the German Chancellor, Angela Merkel, and we recognize the Secretary General of the UN, Antonio Guterres, not far from Emmanuel Macron. A leader shines by his absence: the President of the United States.

Donald Trump did not see fit to participate in this international operation, which raised 7.4 billion euros from the outset, or even to be represented there. In fact, there is one American participant, whose face appears on the screens: Melinda Gates, co-president, with her husband Bill, of the foundation that bears their name. Very active in the field of public health, the Gates Foundation will announce the same day that its donations for research on the Covid-19 amount to $ 300 million.

That the American presence at a world summit is ensured by a private philanthropist, however rich he may be, and not by a political leader, says a lot about the wiping out of American power on the diplomatic scene. The day before, Melinda Gates did not hesitate to criticize this absence: “The lack of leadership in the United States is extremely disappointing. That’s why we turned to Europe.”

Begun gradually since the start of the 21st century, the American downturn has accelerated under the Trump presidency. The coronavirus shock accentuated it. In the space of a few weeks, Washington has turned its back on the international community.

In the middle of a pandemic, Donald Trump used Beijing’s maneuvers at the World Health Organization (WHO) to suspend the American contribution – the most important of the WHO. Missouri Republican Senator Josh Hawley has even called for the abolition of the World Trade Organization (WTO): his country, he says, must recover economic sovereignty.

The varnish is cracking

Seen from the outside, this is the very negation of the American model. This world from which they withdraw, it is they, the United States, who have largely contributed to shaping it. But if the Covid-19 has done damage everywhere, its offensive in the United States is particularly cruel: beyond the human toll – nearly 80,000 dead, 1.3 million cases – it reveals the deep flaws of the economic, social and political system of the first world power.

The origin of COVID-19

A topic of controversy has been the origin of the coronavirus. What is created artificially in a Chinese lab or is it the result of a natural mutations occurring within the animal kingdom?

An indirect ancestor of the coronavirus has recently been discovered: it confirms that a mutation is nothing so exceptional. It also adds a link to the evolution that led to Covid-19.

If scientists seek to trace the beginnings of the epidemic, they are also trying to decipher its biological origins. A study on this subject has just been published. The authors indicate that they have identified in bats a coronavirus, which may well be the closest cousin of the coronavirus. It is not its immediate precursor, but it does provide a better view of mutations in coronaviruses.

This earlier coronavirus has been identified from more than 200 genetic samples from bats from Yunnan province. The sequencing results show that whole parts of the genome are related to COVID-19, with up to 97.2% shared RNA. The small difference lies in particular in the tip-shaped protein, which is used to attack human cells, where the ancestor virus cannot infect humans.

But what is interesting here are the commonalities. Because the parts that the two coronaviruses both contain amino acid insertions from the same register. The content differs slightly, which also shows that this type of mutation occurs randomly depending on various events that can affect each coronavirus.