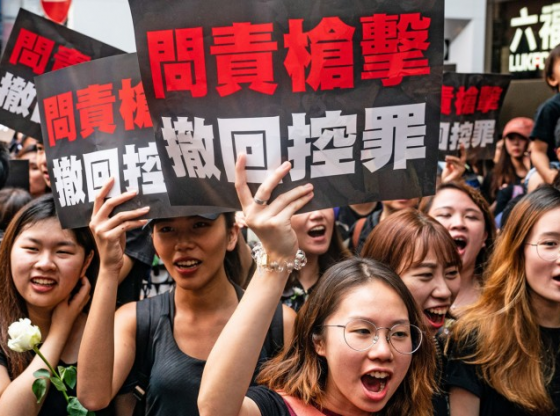 Beijing has been showing its muscle recently as it tries to tighten its grip on the Hong Kong metropolis, in apparent defiance of the principle “one country two systems”. Donald Trump’s hard-line attitude unfortunately does not encourage China to moderate.

The motto “one country, two systems”, which has governed how China indirectly governs Hong Kong since 1997, is in its last days it seems.

The Chinese National People’s Congress is expected to approve a bill on Thursday imposing a “national security” law on the Hong Kong SAR. Provided for in article 23 of the Hong Kong Mini-Constitution, this text prohibits all acts of treason, secession, sedition and subversion against China. It had never been formally introduced, due to the strong opposition from the Hong Kong people, who deem it liberticide.

A year after huge peaceful protests against the bill to encourage extraditions to Beijing, six months after elections marked by a democratic tidal wave, Chinese leaders have decided to overrule and enfore a law on Hong Kong that the citizens have shown they especially do not want.

The message is quite clear, as the Communist Party of China desires to treat Hong Kong like other Chinese cities 23 years after it was handed over by Great Britain. Only Beijing is able to say what still falls under the “two systems”.

Xi Jinping shows here above all that he is at an impasse.

For the past year, Chinese leaders have stepped up their missteps about Hong Kong, transforming an originally limited protest into a more open revolt opposing the communist regime.

Thousands of young people have been arrested, some imprisoned, and the youth of Hong Kong have nothing left to lose. They are not demonstrating for better days, but against a future that can, they believe, only be worse. The introduction of a national security law will obviously not bring any calm.

How far is Beijing ready to go?

A further stiffening of the regime would unfortunately be the logical continuation of a policy which equates all contestation with “sedition”, and all dialogue with weakness.

The West, for its part, seems to be running out of solutions. By increasing the provocations against Beijing in all areas in recent months, Washington has discredited itself. The more the White House claims to help Hong Kong democrats, the more the people of mainland China support their government.

Beijing’s argument that the Democrats in Hong Kong are being manipulated by the United States is not credible, but the use of protesters by the Trump administration has seriously damaged their cause. Beijing’s new coup is as much a response to Donald Trump by a Chinese power getting more nationalist, as it is an effort to bring calm to Hong Kong.

The European Union has recalled its attachment to the “one country, two systems” principle as agreed more than two decades ago, which enables Hong Kong to benefit from a high degree of autonomy. They stressed the importance of preserving the democratic debate and respect for human rights. But Europe, alas, does not seem able to make the voice of reason heard in Beijing.

When Britain surrendered its previous colony to China in 1997, the world was relatively optimistic that China and the West were coming closer.

Hong Kong was to be one of the means of this rapprochement. A quarter of a century later, the reverse has unfortunately happened. Hong Kong has become the symbol of the difficult cohabitation between two increasingly antithetical systems.

The question which remains open is how much force Beijing will use to establish more control over Hong Kong.

Let’s remember that the said one country, two systems concept was agreed to be in place for fifty years, until 2047, so we are nearly half way from the expiration of this agreement.

Beijing would certainly want that by 2047 Hong Kong be an integral part of China, ruled like any other large city of the People’s Republic of China.