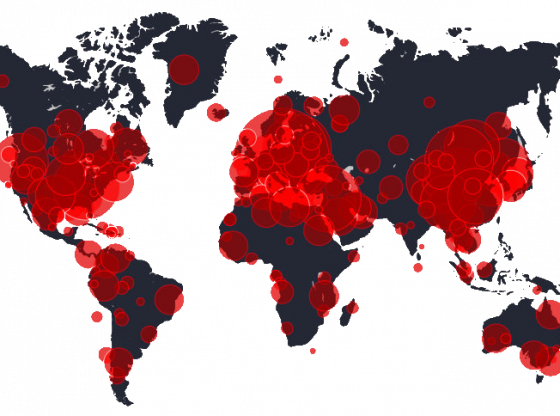 Recently the Coronavirus has had worrying expansion in China and India. The Covid-19 pandemic is also still wreaking havoc in Brazil, as it continues to ebb in Europe.

The pandemic has killed at least 445,213 people worldwide since China officially reported the onset of the disease in December 2019.

Angela Merkel wants a 750 billion euros agreement on a EU stimulus package before the end of July. The European Parliament and the national parliaments will need to ratify this agreement as well as the next budget of the European Union.

European leaders will hold a first summit by videoconference on Friday on this recovery plan. Germany, which takes over the rotating EU presidency on July 1st for six months, is called upon to play a key role in these negotiations.

The so-called frugal countries, supporters of budgetary austerity, such as the Netherlands, Austria, Sweden and Denmark, are very reserved about this recovery plan.

The latter is largely inspired by a proposal by Merkel and the French president. It provides €500 billion redistributed in the next EU budget in the form of grants, notably to the regions most affected by the impact of the coronavirus, and €250 billion in loans.

China’s health ministry said on Thursday that ithad 21 more sick in the capital the day before, trying to stem a rebound in Covid-19 after a new outbreak appeared a few days ago. A total of 158 cases have been identified since last week in Beijing, where the situation is considered serious.

Xinfadi’s wholesale market, the main source of fruit and vegetables for the city of 21 million people, is believed to be the source of the latest contamination. The local authorities have been engaged for a few days in a vast campaign to screen residents and disinfect restaurants. Around 30 residential areas have been quarantined and all schools have been closed until further notice.

The municipality called on residents to avoid non-essential travel outside of Beijing and drastically cut air links.

The two airports in Beijing on Wednesday canceled more than a thousand flights – 70% of those originally planned. People living in areas classified as medium or high risk are prohibited from leaving the city. Several cities and provinces now impose a quarantine on arrival for travelers from the capital.

Health systems are failing more and more in South Asia, where the number of Covid-19 patients is exploding after several months of slow progression.

In Pakistan, the statistics have been racing in recent weeks in favor of an increase in screening, still insufficient everywhere, which causes an underestimation of the number of cases, and a progression of the virus. Pakistan, with a very young population but a poor health system, officially has 160,000 patients. The government fears that there will be 1.2 million at the end of July.

Two weeks after announcing the end of the deconfinement, the Pakistani authorities started again to partition the most affected territories. Since the start of the pandemic, Prime Minister Imran Khan has opposed the closure of the country, which he says saves people from the coronavirus, but starves them to death.

In India, on the other hand, the authorities imposed draconian confinement on their people at the end of March.

The measure has proved catastrophic for millions of poor people, suddenly deprived of work and forced to travel hundreds of kilometers, often on foot, to reach their village of origin, promoting the spread of Covid-19.

With 366,000 patients, India, where some hospitals have set up waiting lists for Covid patients, when other structures sell their last available beds at high prices, is now the fourth country in the world by number contamination.

Bangladesh has 1,300 dead for 161 million people. The situation is catastrophic there and they overwhelmed. Patients die in ambulances while commuting between hospitals. In the capital, Dhaka, the media, based on the number of burials, estimate that official mortality is largely underestimated.

WHO stops testing for hydroxychloroquine

The World Health Organization (WHO) has announced that it has decided to stop clinical trials of hydroxychloroquine as a potential treatment for hospitalized Covid-19 patients on Wednesday, concluding that it does not reduce their mortality rate.

According to the Recovery study, the first major clinical trial – carried out by the British University of Oxford – to have yielded results, hydroxychloroquine has no beneficial effect with regard to Covid-19. On the basis of these analyzes and the study of the evidence produced, after deliberations, it was concluded that the arm of hydroxychloroquine will be withdrawn from the Solidarity test.

Kazakhstan’s historic leader Nursultan Nazarbayev has been infected with coronavirus, its official website said on Thursday.

Unfortunately, the last coronavirus screening was positive, but there is no cause for concern, according to his site. Mr. Nazarbayev, who is celebrating his 80th birthday next month, ceded the presidency to a close friend, Kassym-Jomart Tokayev, last year, but he retained influence and prerogatives with his constitutional status of head of the nation, of president of the ruling Nour-Otan party and of the National Security Council.

He has ruled Kazakhstan since the days of the Soviet Union.

Another leader with Covid-19, Juan Orlando Hernández, the president of Honduras, was hospitalized on Wednesday after being tested positive for the virus and developing pneumonia.